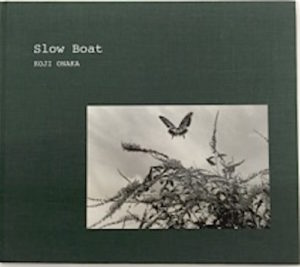 The third edition of his famous book  “Slow Boat”

The photo book “Slow Boat”  is one of the representative works of Onaka, which was first published from Sokyu-sha in 2003, then 2nd print was published by Schaden of Germany in 2008. In the fall of 2017, it is reprinted once again from Chinese publisher imageless studio.
“Slow Boat”  consists of photographs taken by Onaka traveling throughout Japan from 1983 to 1999. “By publishing this book, I was able to confirm the fun and importance of showing pictures without being caught in time and place” Onaka looks back. “Concerning most of them I have no recollection as to where or when they were taken,” (2008 afterword) Onaka selected only his favorite photos from the pile of photographs, then finally composed in a book with Mr. Michitaka Ota of Sokyu-sha.

Although “Slow Boat”  is a photographer’s record of travel, it can easily leave from that position. In the photo, there is a unique character that transcends the landscape in which Showa generation feels simply nostalgic. Therefore, it is still loved in many countries, throughout the ages.
““Slow Boat”  departs from Onaka’s hands and is not tied to time and places, it keeps traveling as freely as an airship.

All books prices include VAT