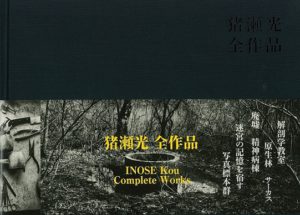 Born 1960 in Saitama. Started his career after studying photography under Seiryu Inoue while still enrolled at Osaka University of Arts. While having numerous devoted fans, he doesn’t present new works very often, as his extremely persistent approach is reflected in every single print that he finishes in up to one month of highly concentrated work. Charged with astonishing density and intensity, his works have been awarded a New Photographer Prize at the Higashikawa International Photo Festival in 1993. Photo books include deja-vu #11: Inose Kou (’93) and Inose Kou Visions of Japan (‘98). Solo exhibitions include the “Inose Kou Photo Exhibition” at Space Kobo & Tomo in 2001.
He also participated in the group exhibition “Lonely Planet” at Art Tower Mito in 2004, and is presently one of those artists whose exhibitions are most anticipated.